WE ARE THE GAME

Water Skyball is a Hungarian invention, an exciting and amusing aquatic sport played by 2 against 2 along special rules. This fast-breaking, more and more popular game was created in 2013 and has been developed for years by the professional team of Fontanus Center with the leadership of Balázs Török-Szabó. Their aim was to create a game that is suitable for improving various physical and mental skills and abilities, is amusing and can be played by a wide audience. Within a few years, the game has ripened into a sport, with national championships organized every year.

The game is played in water by two teams of two people, one ball and to the goal. These are the only similarities to any other aquatic ball sport, in every other aspect it is unique. Its rules, equipment, spirit, the schedule of the championships are special and they offer a playful, exciting activity full of challenges both for the players and for the audience and fans. 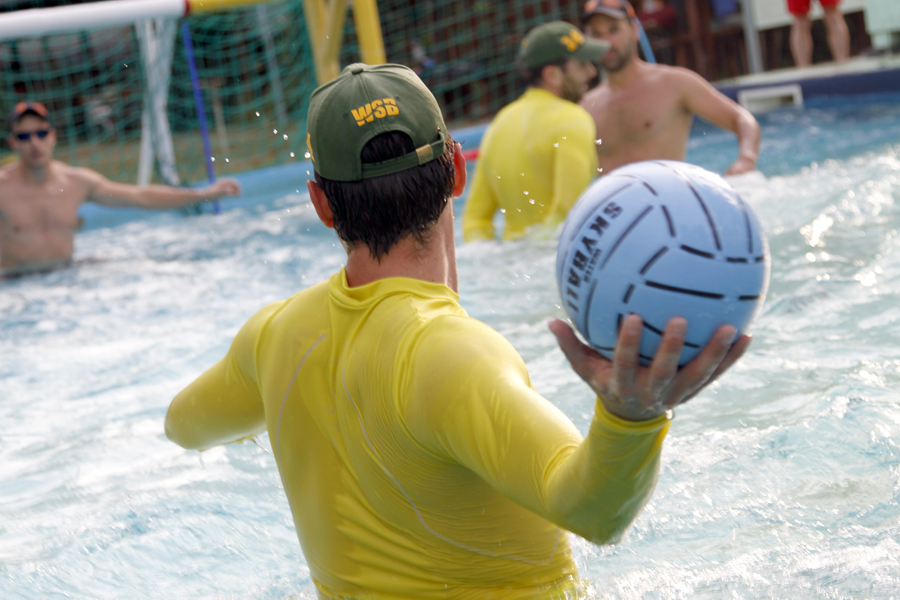 The spirit of Water Skyball is based on universal values such as fair play, respecting other players, will to win, constant pushing and exceeding of our own physical and mental limits. The tools, rules and the schedule of the championships were developed along these values – that is to say, they were created so that contest, challenge and development are possible for every player.

One of the main rules for this new generation sport is the so-called non-contact rule, and the point of it is that the players care for each other for the sake of protecting one another’s, as well as their own safety. Because of the non-contact rule, there is a big emphasis on attention, tactics, quick thinking, cooperation of teammates, and all of this along with the serious physical load and excitement of competition during the championships, as well as in the intense contest during matches.

WSB is the common passion of all players, referees and coaches. Their common goal is constant development, both their own and of the sport itself. They train for the next season together, inspiring each other for better performance and to constantly increase the quality of the game. It is also part of the spirit of Water Skyball that both players, and referees aim to maintain the spirit while playing and refereeing the game, and their joint effort forge them into a team. 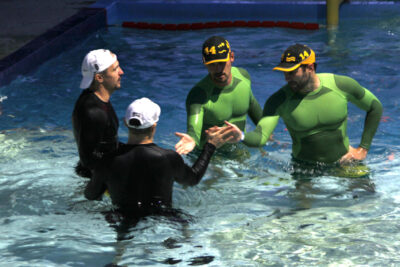 FEATURES OF THE SPORT

One of the specificities of WSB is its special goal. The ”goal-in-goal” solution makes the game even more interesting, more exciting. Because the scores depend on which part of the goal the ball gets into, it gives many opportunities for the teams to work out different strategies for defense and attack. 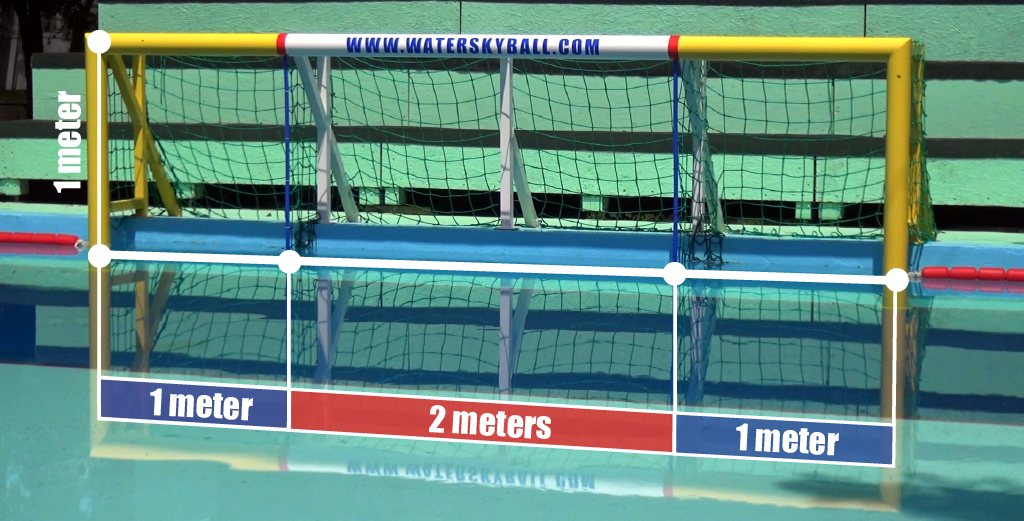 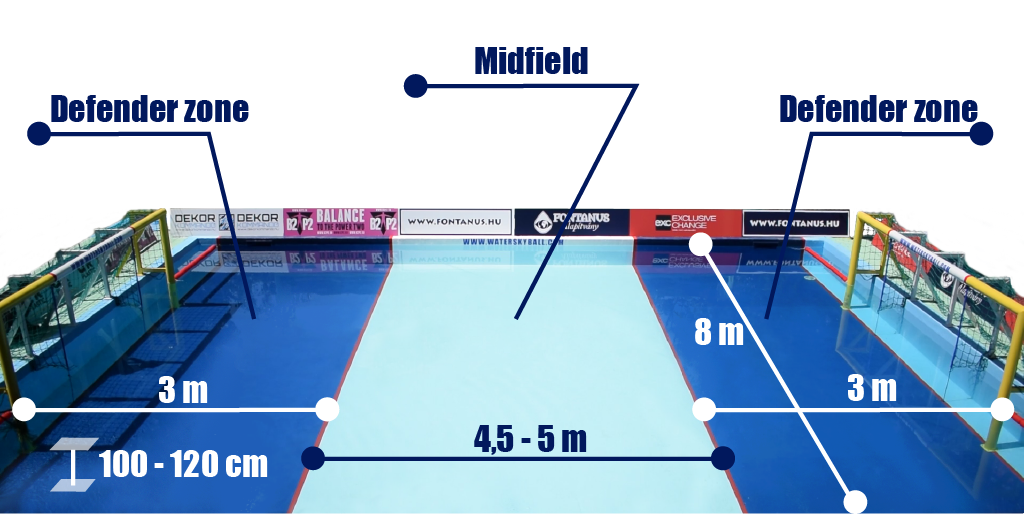 The playing field is 10.5 to 11 meters long and 8 meters wide. The length of the defender zone is exactly 3 meters, the midfield is 4- 4.5 meters. The depth of the water is 1 – 1.2 meters, therefore the water level is at waist-chest height of the players. The playing field consists of 3 parts: the defender zones are marked with dark blue and the midfield is marked with white. In the defender zone there can be only one person at once, in the midfield there can be any number of players, even four.
The score value of goals depends on the zone the ball was thrown from and the part of the goal where it lands.

The score values of goals

The point values can be:

WSB is an independent sport played with a special ball exclusively designed and made for Water Skyball. The ball weighs 240 grams, it is made of a special material with even weight distribution. 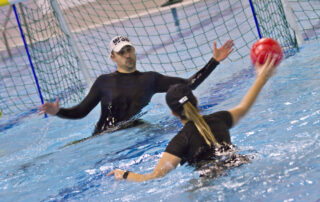 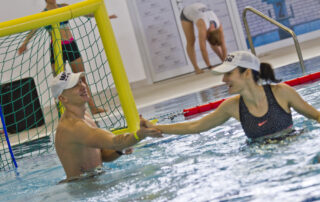 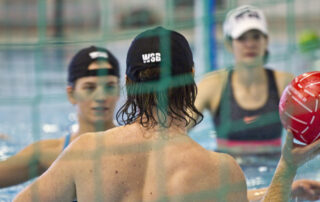 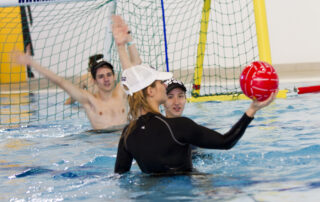 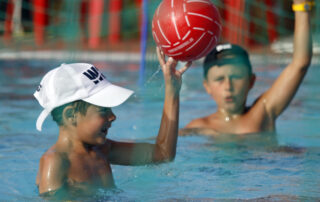 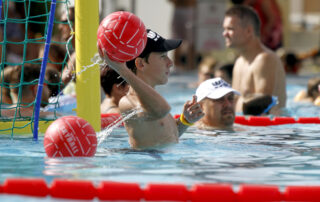 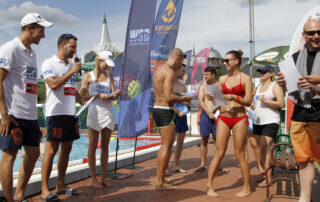 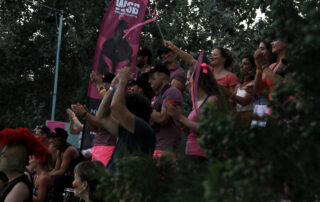 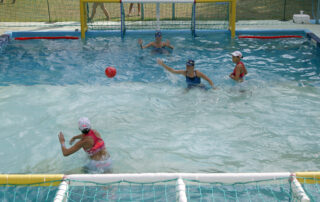 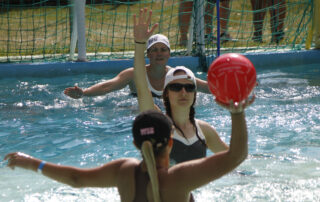 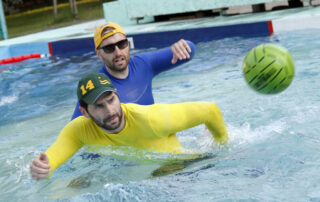 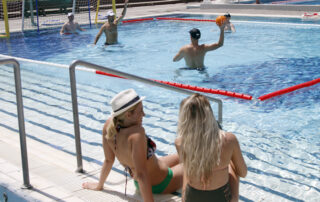 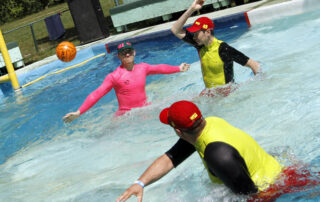 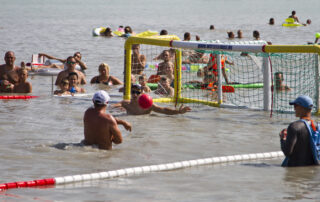 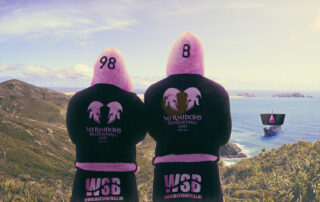 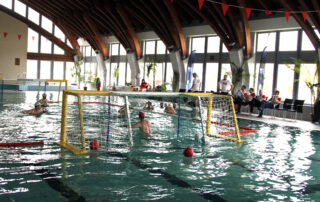 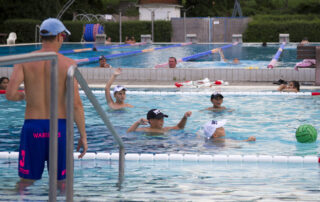 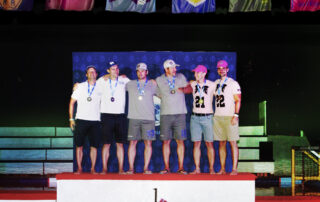 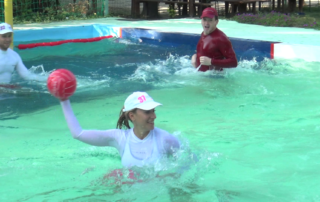 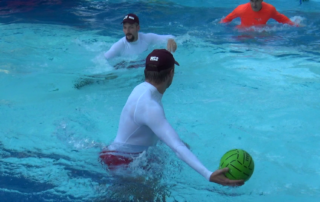 Play with us every Monday at Tüskecsarnok swimming pool in Budapest.